Awesome Lonely Heartstring Band won over the first Kiwigrass with their beautifully polished music, friendly disposition, and great Kiwigrass academy teaching skills. Now they have agreed to make a quick trip back just for Kiwigrass 2020. 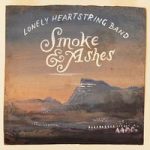 If you haven’t heard Lonely Heartstring Band before check out their Smoke and Ashes CD or ask someone who was at the last festival. Nourished by deep roots in the expansive canon of traditional American music, the band embodies the modern American condition — an understanding and reverence for the past that informs a push into the future.  Members George Clements (guitar, vocals) Patrick M’Gonigle (fiddle, vocals) Charles Clements (bass, vocals) Matt Witler (mandolin) and Gabe Hirshfeld (banjo) bring together their own musical styles to create a sound greater than the sum of its parts.