On Sunday, we were visited by Te Awamutu Courier reporter Caitlan Johnston.

Her write-up of the festival was reprinted in Stuff and on the New Zealand Herald website. We’ve reprinted it below:

Bluegrass musicians and enthusiast of the genre from all around New Zealand and from as far as America all convened in Karāpiro over the weekend for the second Kiwigrass music festival.

Organiser of the festival and bass player for Hot Diggity Bluegrass band, Jenine Abarbanel, said the Kiwigrass festival gave the New Zealand bluegrass music community a place to call their own.

“We’re usually just lumped in with the folk community but we really wanted to have a home of our own and so that’s what this festival is supposed to be – for our bluegrass community,” said Jenine.

The performers included three bands from Australia, one from New Caledonia, two from America and 10 from New Zealand including the Hamilton County Bluegrass Band which set the foundation of bluegrass music in New Zealand after their debut on the late 1960s show, The Country Touch.

“I just thought it was time to show people what bluegrass music was and get it on the rise again,” said Paul.

The headline act for the festival, Lonely Heartstring Band, had come from America and it was their third year on tour in New Zealand.

The band formed six years ago in Boston and is made up of Maddie Witler on the mandolin, Gabe Hirshfeld on the banjo, lead singer and guitarist George Clements, singer and bass player Charles Clements and Patrick McGonagall on the fiddle.

Until recently the band played together full-time but now only get together for the occasional event.

Jenine says each year the band visits their audience grows.

“Everyone just adores them, they’re really good musicians, really good people and so generous with their time,” said Jenine.

“All the internationals just keep going on about how much fun they’re having here and that they’d love to move here.”

Maddie said the highlight of the weekend for the band was a camp concert they played at and she hopes the band will be able to come back next January.

“The camp concert was out on the porch and it was just such a beautiful evening. We just love the audiences here. They’re so enthusiastic,” said Maddie.

We’re so grateful to Ian Fisk and Simon Travaglia for documenting Kiwigrass 2020 so beautifully!

The Kiwigrass raffle is back with more fantastic prizes. All funds raised from the raffle go to support the Kiwigrass Trust.

You’ll see Laurence Frangos-Rhodes playing his blistering solos with Rhode Works and You, Me, Everybody, but have you noticed his guitar?  “His,” as in, he made it.

In addition to being an outstanding musician, songwriter, and singer, Laurence is also a luthier with a growing reputation and backlog of orders for custom made guitars.

Some progress photos straight from the workshop of our young master luthier:

These cute little practice banjos are produced by Hamilton’s own Paul Trenwith QSM, to allow new banjo players to practice their rolls and fingerings without driving their loved ones crazy. 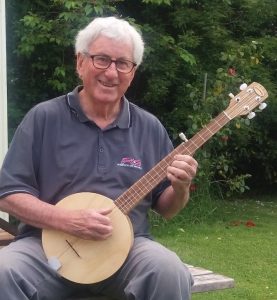 More prizes will be announced soon!

We are pleased to announce our 2020 Kiwigrass artists.